[Those three talks were delivered at different times, but they had connection and using the wheel symbol to explain the Dhamma and practice. The picture of the wheel was mainly connected with the third talk but it also can be used for the other two talks. ] 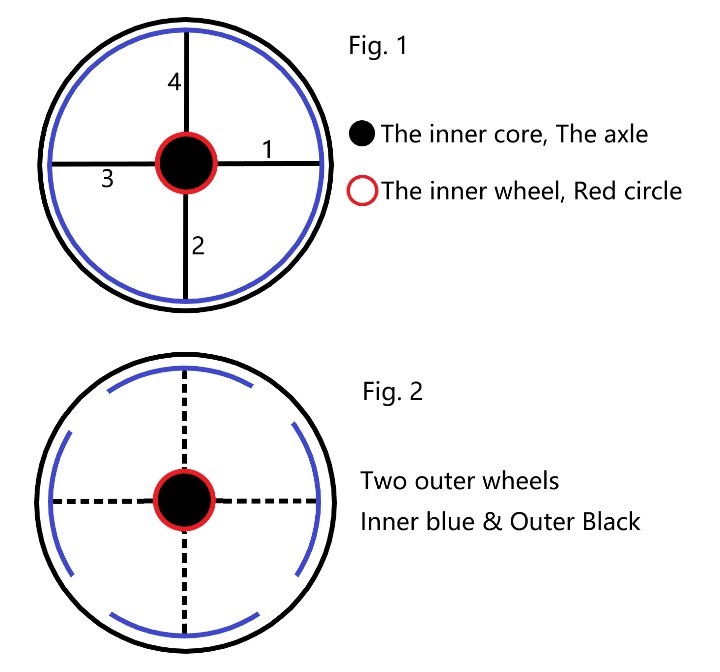 Fig 1 : a complete set of the wheel with 4 spokes
Fig 2 : separated parts of the wheel
The inner core, the axle (āsava)
The inner wheel, the red circle (avijjā and taṇhā)
The 2 outer circles, 2 outer wheels
The inner blue and the outer black
It becomes four circular parts after being taken out the parts (Explaining the above wheel picture).
There are all 5 parts in it:
1. Inner core—axle represents three āsava (taints); i.e., Taints of sensuality (kāmāsava), Taint of becoming (bhavāsava) and Taint of view (diṭṭhāsava). Combining them together becomes taṇhā and diṭṭhi (craving and wrong view)
2. The red circle—inner wheel represents ignorance and craving (avijjā and tanhā)
3. The 4 spokes are types of kamma created by beings. 1 and 2 are wholesome and unwholesome kammas. 3 and 4 are rūpa and arūpa jhanas.
4. Outer blue circle—the outer wheel represents the 5 khandhas or khandha
5. Outer black circle or outermost wheel represents old age, sickness and death
which follow or rolling with the blue khandhas. It’s made by iron or metal to protect the blue which is made of wood not to become worn out.

A wheel has 5 parts; from the centre of the wheel to the outward.

Axle is āsavas. Ignorance and craving are the turners of the wheel. Inner wheel is avijjā and tanhā. Spokes are kammas. The outer wheels are khandhas and old age, sickness and death.

If kāmāsava is turning the wheel, beings are born in kāmaloka (sensual planes), i.e., human being and celestial beings. With avijjāsava is turning the wheel and beings are born in the planes of misery (the four apāyabhūmi). Bhavāsava turns the wheel to Brahmaloka (the planes of Brahma gods) (in this talk Sayadaw gave three spokes only for kamma) The whole twelve links of D. A. is about saṁsāra and develop saṁvega and urging one for practice. The six senses doors are factories produce the whole wheel.

The Buddha gave a very remarkable analogy of the wheel for D. A.. Inner wheel ignorance and craving support the spokes-kammas and it support the outer wheel-khandhas. Axle—āsava is turning the inner wheel. If we are breaking down the spokes with satipaṭṭhāna bhavana and all the other parts—āsava, avijjā, taṇhā and khandhas come to a stop. This is the end of dukkha—Nibbāna. Living beings are turning the wheel of āsava for dukkha. But the Buddha was turning the wheel of Dhamma for ending dukkha.]

According to Sayadaw, Yathābhūta Ñāṇa—seeing impermanence is Kicca Ñāṇa. Penetration of the truth of dukkha, i.e., from Nibbidā Ñāṇa onward knowledges are Kicca Ñāṇa and Path Knowledge is Kata Ñāṇa). Yogi is only seeing dukkha is revolving when Kata Ñāṇa is close to arise. He can’t see the mind and body but knows dukkha is arising and dukkha is ceasing.

At the time of dukkha ceases and at the same time Nibbāna arises. (Sometimes Sayadaw was using language to describe the yogi’s own experiences directly, may be it makes some scholars in doubt and confusion. But if we carefully contemplate can find out the truth.

The best way is direct experience, even though may be still have difficulty to express in words.) ① arises and ② ceases (① is dukkha arises and ② dukkha ceases). The Path Knowledge is seeing it. After that fruition minds arise. These minds are seeing Nibbāna.

There are two revolving of the D. A; sections 1, 2, three and four are the long one and sections two and three are the short one. These are also called mūla and pavatti Paṭicca-samuppādas (D. A.). Mūla Paṭicca-samuppāda is also important because only good understanding of the saṁsāric dukkha can have strong saṁvega—sense of urgency. And then we want to make the effort to end dukkha. The outer wheel (blue) represents the five khandhas and the iron sheet (black) is aging, sickness and death.

T2 [This talk includes with a few details in practice than the previous one. There are three āsava; kāmāsava, bhavāsava and diṭṭhāsava. These are like the axle of the wheel. Combine the three and become 2, taṇhā and diṭṭhi. Therefore, taṇhā is more powerful than avijjā, which is the inner wheel.

The khandhas never have happiness (sukha). It’s the truth of dukkha. Who construct this khandha? Birth, aging and death are the iron sheet wheel (the outer black wheel). Who is turning this wheel? The axle is turning it. It’s āsava axle.

Not knowing is āsava, you will say the axle and the wheel are very far (i.e., the outer wheel). The axle and inner wheel are connecting. The inner wheel is ignorance and surrounded the axle.

The spokes are sometimes going up and down during the turning or moving (Depending on the kammas of beings, but mostly in the planes of misery-dugati). The Buddha also mentioned that the permanent homes of living beings were mostly the planes of misery. If we are checking our own mind every day we will understand what he said).

By the revolving of the taint of craving/taṇhā (axle), the inner wheel of ignorance is turning. Because of ignorance, volition formation arises and spokes come into existence. And then it connects with birth, aging, and death.

There are three of them;

1. Kāmāsava—Taints of sensuality, clinging to the 5 cords of sensual pleasure (form, sound, smell, taste and touch).
2. Bhavāsava —Taints of becoming, desire for this and that life.
3. Diṭṭhāsava—Taints of view, making things as me and mine.

If you break them (the axle) the wheel can’t move. The wandering round of existence (saṁsāra) can’t continue. The khandhas you get are foul or loathsome dukkha (asubha dukkha). In this situation you are adding more of the asubha dukkha of the loads of sons and daughters is very shameful indeed (to the ariyans’ eyes).

We are quite foolish and crazy people. We had coffins and sometimes not when we were wandering in saṁsāra sometime; sometime we had clothes and sometime not (As human beings and animals, mostly without any clothes and coffins to bury).

Therefore we are wandering with shame and disadvantages. Let us do the job of breaking the axle. If we break the axle even though the whole wheel are connecting with it still can’t move on. The axle is greed and wrong view (lobha and diṭṭhi). Therefore taṇhā is more powerful than ignorance. We can only break the axle with the sword of the path (factors of the path).

So, I have told you contemplate with insight. The knowledge of insight (vipassanā magga) breaks it off as much as possible. The true path knowledge totally destroys it. It's something like you want to get the core of the wood, you can’t get it without trimming out the branches and the outer layers firstly. You must remember this example.

At first, use the vipassanā sword to cut the outer layers, then cut the core part by the magga sword. (Continued to talk about the contemplation of the mind). Whatever mind arises contemplate as impermanence and become anicca / magga. Because of anicca the affection to the khandha-kāmāsava not arises. This is me and mine, the wrong view not arises and becomes right view.

So, diṭṭhāsava also falls away. It cuts off the upper layers of three āsava and continuing the contemplation will become disenchanted. Disenchantment is developed by a lot of contemplation. It comes closer to the core when the knowledge becomes mature.

Knowledge becomes sharper means can cut more to the axle. Becoming is not to be joyful. Destruction of it is no need to be sad about. It’s because all are truth of dukkha. Cutting the outer layer is taking time. Cutting the core doesn’t take much time for it. Path Knowledge comes only once.

From ① to ⑤ each support each other outwardly and whirling together going on and on in the saṁsāric journey. How to break the āsava? By the sword of wisdom—the Noble 8 Eightfold Path. There are 2 stages to cut down the āsavas.

Vipassanā Nyan and Magga Nyan—Insight and Path Knowledges. Vipassanā Nyan cut off the outer layers and Magga Nyan the core. Any type of kamma beings done always end up in birth, aging and death. To stop them for functioning, it’s important to destroy the core axle, i.e the āsavas and the inner wheel—(avijjā and tanhā).

It is to know the D. A. of the khandha arising and ceasing to become a Buddha. About the connection of dukkhas are D. A. It’s the truth of dukkha. Therefore the cessation of dukkha is Nirodha Sacca. Not knowing the four Noble Truths is ignorance. Have affection to things wherever you are in is taṇhā.

Only one who knows one's own ugliness wants to make correction. The Buddha also said in this way. Except vipassanā and magga kammas, whatever you are doing cannot cut through the cycle of birth, aging and death. Whatever khandha you have only end up at aging and death.

By their turning that khandhas are whirling around. All merits done under the influence of ignorance and craving will end up at the dangers of aging and death.

The whole wheel will stop only the axle and the spokes are breaking apart. Inside the wheel only exist two of the Noble Truths; dukkha and its cause. (Dukkha Sacca and Samudaya Sacca)

(Here Sayadaw explained clearly and openly why he didn’t accept making merits for rebirths. He was always making people to understand dukkha and want to transcend it by talks and meditations before performing their dānas. There were a few collections of talk by him on this topic.)

Have to follow with knowledge from behind the feeling. If not, it connects with taṇhā, upādāna kamma and whirling around. Whatever mind arises contemplate its impermanence. Taṇhā, upādāna and kamma do not arise with contemplation, axle and spokes are broken.

We are making spokes from the six senses doors. We change new spokes when the spokes are not good. From every sense door comes taṇhā, upādāna and kamma and every day it’s uncountable for us. From the factories of sense doors we are changing new spokes and the wheel is turning on non-stop.

Therefore you have to cut it down with the Path Knowledge. Do the job of the path factors. In this way the axle of ignorance and craving are broken, and the spokes of kamma not exist, and the wheel can’t turn on and on.

According to the translator— Ven. Uttamo's words, this is strictly for free distribution only, as a gift of Dhamma—Dhamma Dāna. You may re-format, reprint, translate, and redistribute this work in any medium.