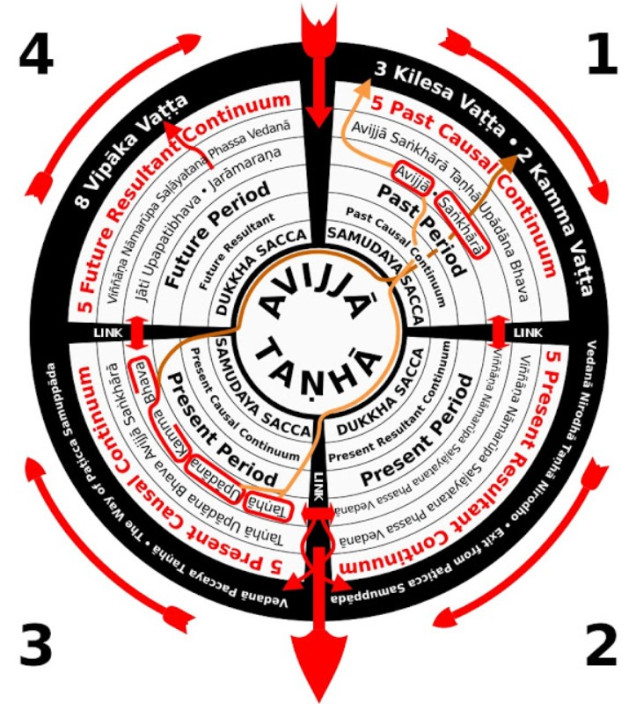 Here onwards will use the short form D.A. for the Dependent Arising Process. Mogok Sayadaw's talks were based on the D.A. process.

For this purpose he constructed a chart which is called the circular chart of the D.A. process. This chart was based on the suttas and commentaries. Therefore to understand more clearer on his talks have to understand this chart. He wrote some verses and explained the teaching systematically (Note: Paṭicca-samuppāda is translated in different ways: 1. Dependent Co-origination; 2. Dependent Arising; 3. Dependent Origination).

The verses on the chart of D.A. process

First verse: Two roots (mūla), 2 truths, 4 groups of layers and 12 factors with its meanings. Three connections, again 2 roots, 3 rounds for existence (vaṭṭas), 3 periods of time, 20 factors of causes and effects, and have to study these 8 points by heart and realize it with practice. This is the liberation from saṁsāra.

Second verse: Base on ignorance (avijjā) and craving (taṇhā), clinging (upādāna), action (kamma) and mind-body arise. Like a tree from a seed, and a seed from a tree, which are connecting without break. With the cause of kamma and mind-body; and with mind-body and kamma arises. In this way these are arising again and again. Contemplating with knowledge as many humans, gods and living beings appear are not by the Mahā Brahma's or God's Creation.

First it needs to learn the 8 points, just mentioned in the first verse, and then to study the 12 factors of D.A. process. By itself it can be a long lecture for many hours. Here only give a short introduction for it. After having the basic ideas on it and we can contemplate to find out more by ourselves. The Buddha's Teachings are always practical and developing wisdom faculty. Faith without wisdom is blind faith and leading to sufferings.

Study of the 8 points

D.A. process is the khandha process. Paṭiccasamuppāda, khandhas and saṁsāra are the same thing.

Vaṭṭa means round of event, moving round in a circle or round of existence. Therefore kilesa vaṭṭa means oppressive dhamma which afflict or torment beings with tiredness and suffering in a circle. In see ① and sec ③ kilesa vaṭṭas are indicating by arrow as avijjā, taṇhā and upādāna.

Kamma vaṭṭa means actions are going on in a cycle. In sec ① and sec ③ the 2 kamma vaṭṭas are indicating by arrow as saṅkhāra and kamma bhava.

7. Three periods of time:
Section ① is past life. Section ② and ③ are present life. And section ④ is the future life.
8. Twenty factors of causes and effects:
① Sec. ① has the 5 past causes. These are avijjā, saṅkhāra, taṇhā, upādāna and bhava.
② Sec. ② has the 5 present results. These are viññāṇa…. vedanā.
③ Sec. ③ has the 5 present causes. These are taṇhā, upādāna, bhava, avijjā, saṅkhāra
④ Sec. ④ has the 5 future results. These are viññāṇa…. vedanā. Therefore all together are 20 factors of causes and effects.
Have to study these eight points:
① 2 roots ② 2 truths ③ 4 groups of layers ④ 12 factors ⑤ 3 connections ⑥ 3 rounds of existence ⑦ 3 periods of time ⑧20 factors of cause and effect
Learn by heart:
Study the D. A. process with its chart is called pariyatti—learning/studying. Learn it by heart and can use it any time in need.
To realize it:
To understand them with practice is called patipatti—direct knowledge.
This is the liberation from saṁsāra:
It's called pativeda—realization of Nibbāna, the ending of dukkha. All these 3 stages are also can be described as follow.
With full understanding—pariññā:
Learn by heart is ñāta pariññā—full understanding by study.
Practice is tīraṇa pariññā full understanding by contemplation.
Pahāna pariññā—full understanding with abandoning of kilesa.
With truths (sacca):
Learn by heart is sacca nyan (ñāṇa)—knowledge of truth comes by listening talks. Kicca ñāṇa—functional knowledge of the truth comes by contemplation, in accordance with the truth.
Kata ñāṇa—the knowledge of the ending of the practice.
The ending of the first verses are about the 3 sāsana (Buddha's Teachings). These are called pariyatti, patipatti and pativeda. As pariññā; ñāta pariññā, tīraṇa pariññā and pahāna pariññā. As knowledge (ñāṇa); sacca ñāṇa, kicca ñāṇa and kata ñāṇa. These are the duties which have to fulfill them.
① For learning by heart is the teacher's duty to teach and talk.
② Practice is the yogi's or student's duty.
③ Realization is the Dhamma's duty and it comes by itself with the practice.
Study of the 12 factors of D.A. process
① Avijjā (Ignorance)
Avijjā means not knowing. This is not knowing of the Four Noble Truths. These are:
(1) Not knowing the noble truth of dukkha (Dukkha Sacca).
(2) Not knowing the noble truth of the origination of dukkha (Samudaya Sacca).
(3) Not knowing the noble truth of the cessation of dukkha (Nirodha Sacca).
(4) Not knowing the noble truth of the path of practice leading to the cessation of dukkha (Magga Sacca).

Therefore avijjā is darkness. Also not knowing what is right and wrong. So it's also called wrong knowledge (micchā ñāṇa).

Nearly every living being is alive with these 6 consciousnesses. Except non-percipient beings (asaññasattā) and immaterial beings (arūpabrahmas), they are a little different from the mind-body beings. In every mind moment, it can only arise one consciousness. Because 2 consciousnesses can't arise together at the same moment.

There are six types of feeling according to the six sense-doors. Feelings arise in the eye, ear, nose, tongue, body and mind doors.

The differences between (1) and (2) are; craving for external objects is kamma taṇhā and for the internal khandha is bhavataṇhā. Their nature is greed (lobha).

There are 4 kinds of clinging;

Kammabhava means kammically active process of existence or actions conditioning for existence. In the diagram of the D. A. process, kammabhava at sec ③ was written with incomplete form; such as:

It means Kamma and Bhava could be connected or disconnected. They are still connected for worldlings to sekhas (sotāpanna to anāgāmin); but not for arahants, pacceka-buddhas and Buddhas. Why is that? Because upapattibhava and kammabhava combine together only become completion (upapattibhava—passive or resultant process of existence). For an arahant it's only functional kamma and no more existence. In the original 12 factors of D. A. process was written as bhava only. Under the influence of clinging one engages in actions that are accumulated as kammas.

There are 3 types of kamma;

Getting a new life or khandhas.

There are 4 kinds of births:

(1) Born from a mother's womb—jalābuja.
(2) Born from an egg—aṇdaja.
(3) Born from inside the woods, bamboos, moss, decomposed meats and fishes, these beings attached to these things saṁsedaja (many kinds of worms and can be regarded as natural cloning).
(4) Spontaneous births—opapātika (e.g., heavenly beings)—having their full grown sizes with births.
The differences between (3) and (4) are: saṁsedaja beings were rare and small and grown up slowly, e.g., lotus born human.

Beings also can have different numbers of khandha. Some have 5 khandhas, some have 4 mind khandhas (e.g., arūpabranma) and some only have the physical khandha (e.g., non-percipient beings).

There are 4 kinds of death

On the factor of kammabhava and has mentioned about the bodily action—kāya kamma. It doesn't include taking intoxicants (liquors and drugs). Also, we can't find it in the 10 unwholesome kammas. In the 5 precepts the last one is abstinence from intoxicants.

We know that it's very harmful to human beings and society and no doubts about it. If we break this one precept and can break all the other four. Even the Buddha mentioned about its future result was not good. So why don't we find it in the 10 unwholesome kammas? A Burmese teacher said that it was including in the sexual misconduct.

But he didn't explain the reason. Truly, sexual desire is intoxicating. Because of sexual desire, some had done unlawful and wrong sexual practices. Such as adhamma rāga and micchā dhamma mentioned in some suttas, moral of humans was degenerated when the time came. Nowadays we can see more and more these things in society.

This is only an experimental WWW. It's always under construction (proofreading, revising)!

According to the translator—Ven. Uttamo's words, this is strictly for free distribution only, as a gift of Dhamma—Dhamma Dāna. You may re-format, reprint, translate, and redistribute this work in any medium.